UpToYou is based on a model of integration and has already been applied in a sample of 10 adolescents (during the 2014/2015 school year), in a project funded by the Caja Navarra Foundation.

Regarding student self-assessment, they took Plutchik’s impulsivity scale before and after, Dweck’s test on self-beliefs about intelligence and personality and the Big Five Factors personality test.

Teachers responded to a questionnaire in which they evaluated all students in seven areas, including apathy/motivation, nervousness/tranquility, impulsivity/self-control, allows/does not allow for correction, never/always does homework, grades, and with/without discipline problems. Students’ parents also participated by doing this same evaluation (excluding the grades area).
​
Student’s scales (control and program) identified impulsivity, belief systems, their main personality traits and tolerance for frustration, which allowed the research team to form study groups. Teachers evaluated students. Feedback from parents encouraged personal monitoring and a dynamic dialogue between parents and children. The dependent variables, therefore, were assessed with these tests. Socio-demographic variables were taken into account as modulatory variables, especially sex, which will likely be an important factor in improving the program.

Although the pilot was only carried out with 10 students, the results are promising. Herein, we offer the program's effect on students’ impulsivity and on their belief system about intelligence and personality (Dweck scale). In the former case, on the Plutchik impulsivity scale, there is a significant decrease in the dependent variable (F = 279,949, P <0.0001). This result comes from a general linear model that considers time (start vs. end of school year) as an inner-subject factor and considers the group (UpToYou vs. control) as an inter-subject factor. As shown in the graph below, these preliminary results show that the assessment of impulsivity decreased in the UpToYou group, while it rose slightly in the control group. The time-by-group interaction is very significant, as reflected in the statistics given above, which shows that belonging to one of two groups (UpToYou or control) was an important factor for the change in impulsivity that occurred between the beginning and end of the school year. This change is summarized in the following chart: 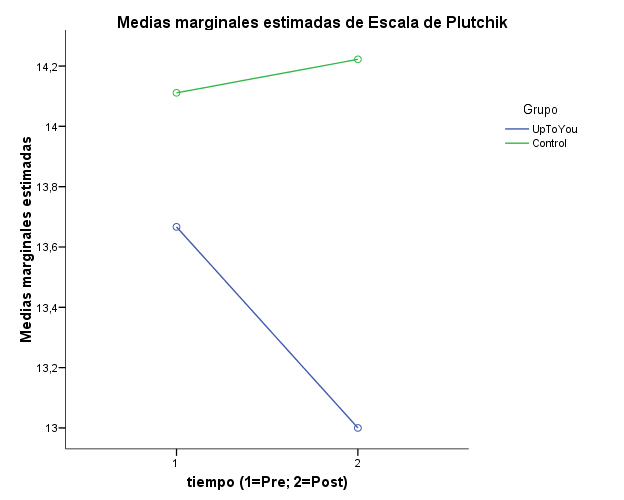 Moreover, analysis of the Dweck test, which evaluates belief systems about intelligence and personality, also yields interesting results, despite the limited number of participants in the pilot study. With this scale, which is widely validated, we used 10 questions to discover if adolescents have a fixed or incremental mentality. They answered questions such as, "My intelligence, whether high or low, is what it is and I can only change it a little," or, "My personality is part of me and I can only change it a bit." Students indicated whether they strongly agree with the statement (rating = 6), totally disagree (rating = 1), or an intermediate values. All questions, except the tenth one, pointed to a fixed mindset or conformism when it comes to intelligence and personality, and therefore a high number (leaning toward 6) implies a fixed mindset in which self-improvement is not highly valued (with respect to the tenth question, the values ​​were inverted for analysis). As we saw before, UpToYou’s effect on this measurement was also highly significant (F = 384,263; P <0.0001), especially with the intersection of the inter-subject measure. Again, a general linear model was conducted with the same intra-subject and inter-subject factors mentioned above (time and experimental groups, respectively). For the control group, students increased their belief in a fixed mindset. However, the UpToYou group saw a decline in this belief, in favor of an incremental mentality. The results are explained in the following graph: 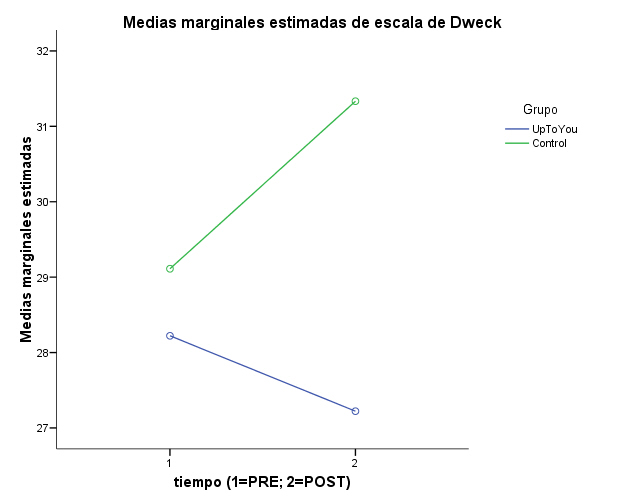